skip to main | skip to sidebar

The show is up

The show is up; here are a few hastily-taken pics. My lecture will be on Thurs., Oct. 23rd -- the reception goes from 5pm-7pm. 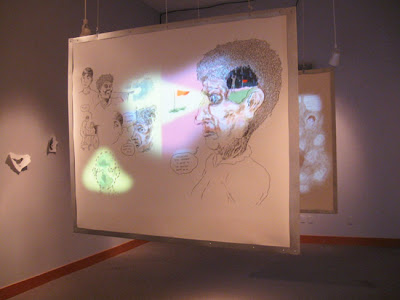 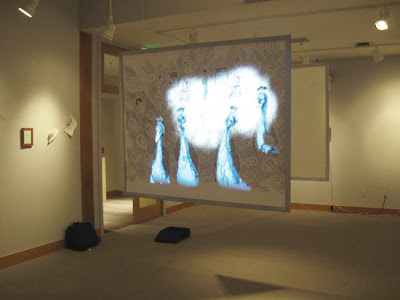 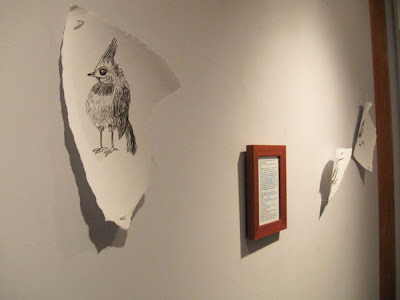 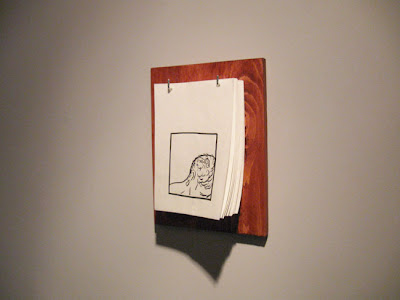 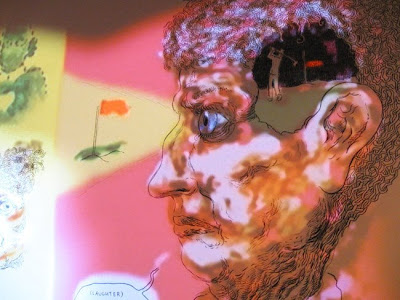 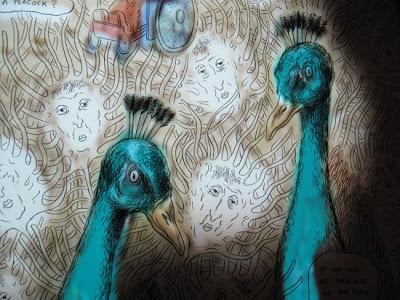 The Tahoe Gallery presents “she’d hallucinate ghosts,” an exhibition of drawings and projections by Chris Lanier from October 13 to November 7. The exhibition traces the contours of a mind that’s in the process of failing. There are multiple images of a frail old woman, sometimes surrounded by visions that don’t quite correspond to the reality around her. Two large-format drawings are “colored in” by digital projections, which include brief animations that provide missing elements of the drawings themselves. The old woman’s hallucinations of ghosts, and of improbable visitations by gatherings of birds, alternately seem to comfort her, and to provide her an index for her deterioration.

There will be an artists’ talk, and a reception, on October 23, at 5pm.

Chris Lanier is an artist with a background in both traditional and digital media, and a demonstrated interest in hybrid forms, having worked in multimedia performance, digital animation, web production, and comics. His animation has screened at Sundance and won awards at several international festivals, including the Grand Prize for Internet Animation at the Ottawa International Animation Festival. Most recently, he collaborated on “The Mapping Project,” a dance theater performance involving two dance companies, multimedia projection, and an art installation for the 2008 San Francisco International Arts Festival. He is also an essayist and critic whose art criticism has appeared in a variety of online and print publications, including the San Francisco Chronicle, Salon Magazine, the High Hat, the Shotgun Review, the Bay Guardian, and the Comics Journal. He is currently the Assistant Professor of Digital Art at Sierra Nevada College.

For additional information, please contact the artist directly at chrislanier2001 [at] yahoo.com, or 775-324-1303. For more information on the Tahoe Gallery, contact:

All in a day's work 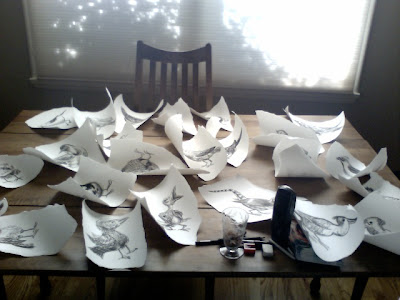 This was perhaps the most satisfying day working of the show, a couple weekends ago: I was able to clear the deck and to mostly spend the day drawing, cranking out inaccurate pictures of birds. The soundtrack for the day was some Beethoven quartets and sonatas, a bunch of Timbaland-produced tracks, and a good chunk of the VP debate. When I got up the following morning, the tablefull of pictures looked like a small installation had taken roost in the livingroom.
Posted by Chris Lanier at 10:41 PM No comments:

Postcard for the show 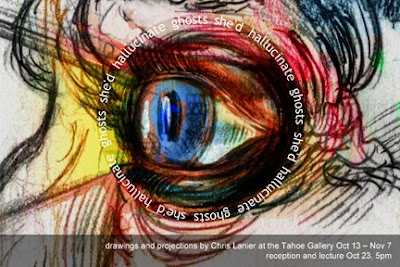